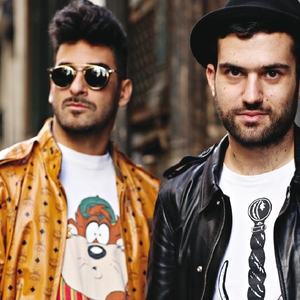 Duck Sauce is an American/Canadian DJ duo consisting of Armand Van Helden and A-Trak. The duo is signed to Casablanca Records & Republic Records.

The pair aims to produce disco house tracks that will appeal to club DJs.
Their first tracks are "aNYway" and "You're Nasty". The track "aNYway" capitalizes "NY" to signify their origins in New York. The song is sampled from "I Can Do It" by Final Edition. Their debut EP, Greatest Hits was released on July 15, 2010.

In the summer of 2010, Duck Sauce released a track called "Barbra Streisand", named after the singer of the same name. The track heavily samples the 1979 song "Gotta Go Home" by Boney M, which itself is based upon the original tune "Hallo Bimmelbahn" by the German band Nighttrain. The famous hookline is written by Heinz Huth. "Barbra Streisand" was first played at Miami Winter Music Conference in 2010, and gained heavy DJ and radio support in the UK, Ireland, Germany, Norway, Austria, Poland (Polskie Radio 4), France, Finland, Romania, Australia, New Zealand, South Africa and Sri Lanka. In Australia, "Barbra Streisand" was first heard on the radio station Triple J, while in New Zealand it made its debut on Auckland student radio station 95bFM. The song has since also moved to various commercial radio stations and has increased in popularity. In the UK the song peaked at #3 on the UK Singles Chart and reached #1 on the Australian ARIA Club Chart as of 12 September 2010. For Billboard magazine week ending December 18, 2010, the song reached the #1 position on the Dance/Club Play Songs chart.

On April 26, 2011, the song was featured in Glee's 18th episode in their second season entitled "Born This Way". The song is also featured in the Vitamin Water Revive commercial.[3] The "Barbra Streisand" music video has over 67 million views.
"Big Bad Wolf" was released by Duck Sauce in 2011 on BBC radio and samples wolves howling. The music video features genitalia replaced by human heads. A-Trak notes "When Keith came up with this idea of 'crotchfaces,' we just thought it was hilarious."

On June 6, 2013, announced via Facebook, a preview of the song "It's You" was shown, with the full song released on June 25, 2013. The music video features in a barber shop transformed into a surreal dance party which comes to life with the beat of the song. The music video earned them a nomination at the MTV Video Music Awards hosted on August 25, 2013 held in Brooklyn, New York.