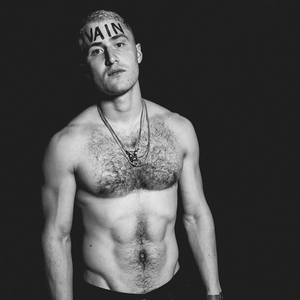 Posner was born in Ontario, Canada and raised in Southfield, Michigan.His father, an attorney, is German and his mother, is Baptist. Posner graduated from Groves High School and Duke University. At Duke, Posner was a member of the Sigma Nu fraternity and graduated in 2010 with a degree in sociology and a certificate in markets and management.

Working withDon Cannon and DJ Benzi, Posner released his second mixtape, A Matter of Time (the first mixtape being Reflections of a Lost Teen), from his dorm room at Duke University in March 2009. In July 2009, Posner signed a deal with J Records (RCA/Sony).He chose to return to Duke after signing his record deal, and toured on the weekends while at the same time recording for his debut album.

Posner's second mixtape One Foot Out the Door, hosted by Clinton Sparks, was released on October 27, 2009. The mixtape was accompanied by a web series also entitled One Foot Out the Door which aired bi-weekly from September 30, 2009 until December 2009. During this time, he hired his manager, Daniel Weisman of Elitaste Inc., who also manages Wale.

31 Minutes to Takeoff, his debut album was released on August 10, 2010. The first single from the album, "Cooler Than Me", produced by Gigamesh, climbed the Billboard Hot 100 to reach No. 6.

Posner performed on national television for the first time on the talk show Last Call with Carson Daly on Tuesday, 27 October 2009. He also performed his song "Cooler Than Me" on America's Got Talent on July 28, 2010. He also performed at John Barleycorn in Schaumburg IL, on July 31st, on Live with Regis and Kelly on August 3rd, and on Late Night with Jimmy Fallon on August 4.

He performed "Cooler Than Me" on The Wendy Williams Show on August 5, 2010, and on The Tonight Show with Jay Leno on August 9, 2010. Mike Posner has collaborated with artists like Kid Cudi, Wale, Big Sean, Bun B, One Be Lo, Eric Holljes, and 3OH!3.